In the last post, I wrote about the Flattening Treasury Yield Curve being an indicator of a slowing economy and future recession. This week, I will begin a three-part series that investigates two of the economic vulnerabilities presented by the Board of Governors of the Federal Reserve System in the biannual Financial Stability Report. These are points of economic distress that may give in under the current strain of slowing business projections, rising interest rates, and the continued economic shocks of international trade wars and the insecurity of funding for the federal government. Real estate investors should be aware: the disaster that the vulnerabilities may lead to will affect the performance of your investments in both the near- and long-term.

With this installment we focus on the first economic vulnerability, which is the market euphoria that has inflated stock valuations to levels only surpassed by the Great Depression and the Dotcom Bubble, all while corporations are increasingly practicing short-term financial engineering policies over long-term capital expenditures. The second installment will cover the perilously weak balance sheets and slipping credit standards for what is now the largest group of investment-grade corporations, BBBs. The third installment will describe how real estate investors should hedge against the risks of these two economic vulnerabilities and prepare their portfolios for what may be a deeper than anticipated recession.

Last year, former FED chair, Alan Greenspan, who warned that “irrational exuberance” had formed a bubble in the equity market well before the Dotcom Bubble burst, shared on Bloomberg TV that there are bubbles in both the Stock and Bond Market.

The Price-to-Earning (P/E) ratio of the current stock market cycle is at the third highest valuation it’s ever been (only surpassed by the run-up to the Great Depression and Dotcom Bubble). 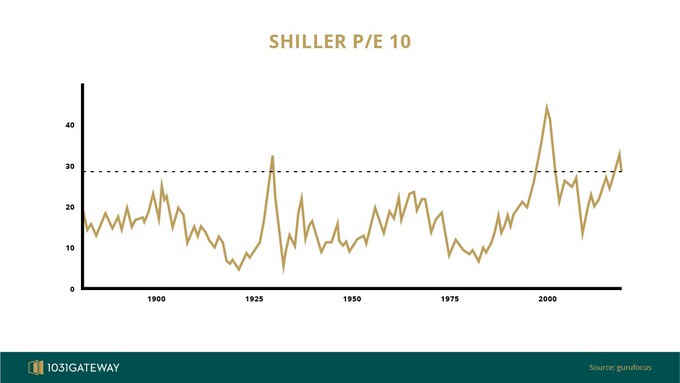 The P/E ratio shows the price for equity in a corporation relative to that corporation’s earnings. A high P/E ratio implies that investors will risk high premiums in the equity market to get onboard a bull cycle.

A major contributing factor to the stock market’s elevated valuation has been a dovish FED, whose quantitative easing policy has pumped unprecedented amounts of cheap debt into the market for years. The following chart shows just how tight the correlation between the FED’s balance sheet and the value of the S&P have been since the Great Recession. 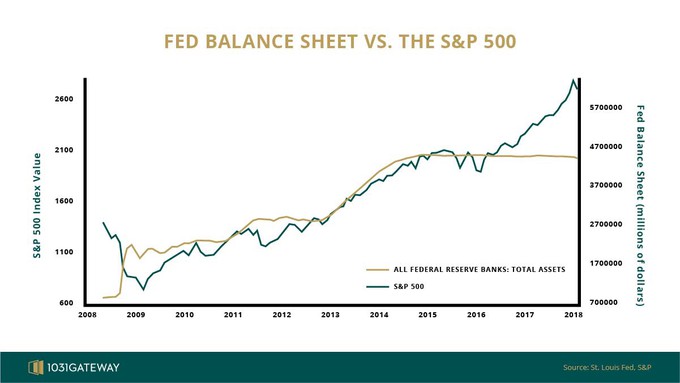 The FED slowed the flow of debt starting in late 2015 by starting what has been a consistent policy of raising interest rates. When that happened, a second major contributing factor to elevated stock valuation entered the scene: corporate stock buybacks. The correlation between buyback and S&P Value can be seen below.

In 2018, bolstered by President Trump’s tax break, corporations used cash and debt accrued in the bond market to buy a record-shattering $1.1 trillion worth of their own corporation’s stock. That’s $1.1 trillion of corporate cash and debt that went into the stock market, rather than R&D innovation or higher incomes for employees.

Executives have said that a stock buyback is an effective way to return capital to their investors. By purchasing their shares, the corporation dries up available stock in the open market, which increases the Earnings Per Share (EPS) of an investor’s equity. And it signals to the market that executives think that their stock is undervalued and are taking the opportunity to buy “below face-value” – investors then jump in and quickly bid up the price. Research from the SEC shows that a mere announcement of a stock buyback can boost up the price of the stock by 2.5%.

What stock buybacks don’t do is increase the intrinsic value of a corporation. Larry Fink, CEO of BlackRock (the world’s largest asset manager) sent a letter to companies in the S&P 500 that they must spend more on development, rather than focusing narrowly on short-term returns for their investors:

"It concerns us that, in the wake of the financial crisis, many companies have shied away from investing in the future growth of their companies. Too many companies have cut capital expenditure and even increased debt to boost dividends and increase share buybacks …. We certainly believe that returning cash to shareholders should be part of a balanced capital strategy; however, when done for the wrong reasons and at the expense of capital investment, it can jeopardize a company's ability to generate sustainable long-term returns."

The 2018 buybacks happened at the expense of capital investments. A report shows that companies in the Russell 1000 are distributing most of their tax savings to shareholders (primarily through stock buybacks): 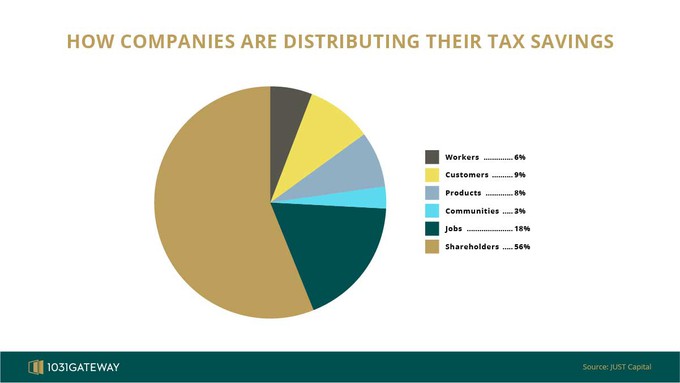 Research by the SEC reveals that buybacks are not only happening to the detriment of the corporation’s long-term development but are in-part conducted, as Larry Fink seemed to hint at, “for the wrong reasons.” When insider executives announce a buyback, they are suggesting to the market that stocks are below intrinsic value, but the SEC’s research has shown that insider executives often use buybacks as “a chance to cash out.” Both the quantity and amount that insiders sell in the days after a buyback exponentially increase: the frequency of trades by insiders’ doubles in the days after a buyback and the amount traded increase five-fold.

Here’s a chart from the SEC: 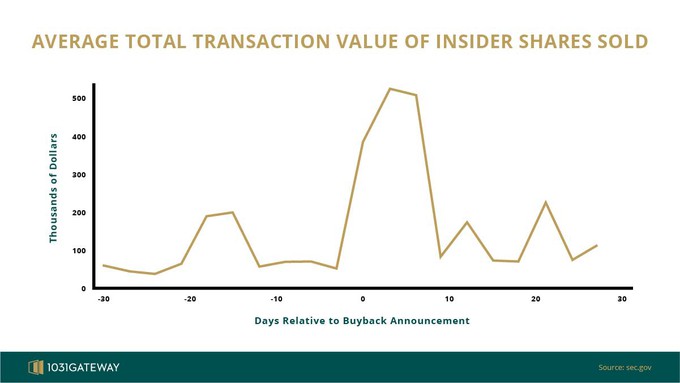 The inconsistency of a buyback parlayed by executive selloffs raises the question: if a corporation purchased its stock because it’s below face-value, then why are executives selling their stock in just a week following the buyback?

The answer, according to an economist, William Lazonick, is that executives are merely serving their interest. Lazonick explains that on average, the majority of executives receive 42% of their compensation from stock options and 41% from stock awards. When a corporation boosts their EPS, executives boost their salary. The SEC Commissioner Robert J. Jackson Jr. boils down the reason for stock buybacks to this: “what we are seeing is that executives are using buybacks as a chance to cash out their compensation at investor expense.”

What’s the result for equity investors? Stock in a company who has used the influx of cash and debt issuance to pump up its EPS, rather than pay down its liabilities and increase its intrinsic value and long-term competitiveness.

A slowing economy and the rising cost of debt will correct the unjustified cost of a corporation’s stock given their earnings. However, stock prices and investors’ portfolios aren’t the only things at risk from market euphoria and corporate executive short-termism. An unprecedented amount of debt has decayed the balance-sheets and creditworthiness of a large contingent of investment-grade corporations. If a slowdown and rising interest-rates too quickly dry up cash flow, we may see a cascade of investment-grade corporations falling to junk as they fail to repay their debt obligations. If this happens, we may be looking at a deeper recession than many investors are prepared to endure. More on this in part two.